[Dogs in the Vineyard] Kingkiller + DitV

framweard
March 2011 edited March 2011 in Play Advice
I'm planning on running a Dogs in the Vineyard hack to play a game based off of an aspect of Patrick Rothfuss' uneven-but-entertaining series, The Kingkiller Chronicle (The Name of the Wind, Wise Man's Fear, third untitled unreleased book). You should maybe Google it if you have no idea what I'm talking about and want to check out this thread.

So there was once this badass order called the Amyr. They did what had to be done. They burned villages, killed priests, and boiled kittens if it served the greater good (in this case, the Greater Good, a specific philosophy (I think)). Once an Amyr knight was inducted into the Order and got his tattoos (they have wicked tattoos on their hands), his word was law. If an Amyr wanted to rape and pillage and destroy, they didn't have to justify their actions. It was trusted that whatever an Amyr knight did was in the interest of the Greater Good. Kind of (read: exactly) like The Order Set Apart to the Preservation of the Faith of the King of Life (I think I got the name right, going from memory here).

Anyway, at the time the story of the novels takes place, the Amyr have all but disappeared. The historical records about them are uneven, contradictory, and hard to come by. Almost as if they were pruning themselves from history! The novels have a big bad band of bad guys, who pretty much everyone is afraid of, from the wisest king to the fiercest warrior to the mightiest Faen creature (well, save one Faenling perhaps). The Amyr are not afraid of these guys; the big bad guys are afraid of the Amyr.

So this is the thread where I'll talk about it, before and after. Right now, we're at the before stage! So, Dogs veterans, would you be so kind as to give me your advice? What needs hacking, and what doesn't (generally speaking). Can I just use the book as written and write a cheat sheet of useful information about the Amyr-analogue I'm interested in presenting? They have magic, I think, so the supernatural scale is fine as written. I dunno. Shoot me some advice! If you would be so kind. 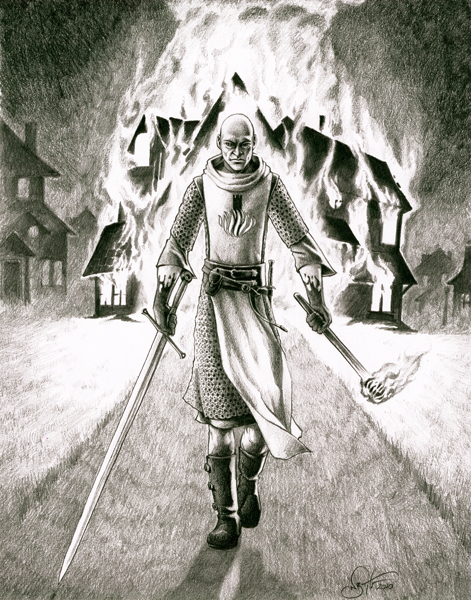