Beth_in_Virginia
March 2012 edited March 2012 in Actual Play
so, tonight i took part in a session of MH. technically, the 2nd session, but since the Ghoul dropped out to be the MC, the old MC rolled up a Mortal with explicit intentions to take Infernal moves as soon as possible.
So the group was:
me, Lucca, the Witch (naturally gifted; skeptical of the supernatural, despite her powers)
George played Hope, the Hollow (born from a wish to a childless couple. constantly learning and mimicking social behaviors)
Joe played Carla, the Mortal (in love with Lucca, and obsessed with devil worship)

So we start out in homeroom. Carla immediately turns Lucca on. Lucca, irritated, lays a hex on her to keep her from lying. This somehow leads to Carla getting sent to the principal's office for being rude, which spirals into Carla taking her friend Alexandra off to the woods to do Satanic rituals to get back at their homeroom teacher.
Lucca and Hope go to chemistry together, but their teacher, Miss Alegard, is some kind of monster or blood-drinker or something who starts honing in on Hope as her prey. Hope has only a vague idea of what's going on, and Lucca, feeling protective, tries to intervene. Ms. Alegard starts to berate Lucca for interrupting, and Hope tries to "protect" Lucca by throwing the chem teacher out the window.

Shortly thereafter, Hope is on fire (and yet unharmed) and tearing open the hood of Ms. Alegard's car as she tries to drive away. There are cops everywhere, and Lucca just runs on home. Hope and Carla end up getting dragged in handcuffs to the drunk tank while the cops figure out what to do with them. Lucca's "next time on Monsterhearts" bit involves her and an ex-boyfriend dropping acid and talking about how weird their town is.

Apparently, in the previous session, they established that the police dept. had been infiltrated by some kind of death cult. I mention this because that may be a factor in what happens to Hope and Carla in jail. Something tells me Lucca would organize a protest in front of the jail or something.

edit: on a mechanical level, you really have to be a flirt to take Strings with people. Strings let you do help or interfere with others' rolls, make them act under fire, or even offer other players an experience point in exchange for following one command. The simplest way to get Strings is by successfully turning someone on. it's a +hot move everybody gets.
Lucca was sparing with the flirtations, and thus did not get as many Strings. But Hope and Carla racked them up like crazy, and used them to affect each other's rolls, compel one another with experience points, and such.
Buddha, our GM, had a large set of clay rune stones that we used for Strings. It was a nice touch, and felt very appropriate given that we had a Witch and a Mortal/Infernal in the group.

Casting hexes is pretty cool, and my Darkest Self got triggered, which was interesting: I had to use my magic as hard as I could on anyone who fucked with me, until such time as I "offered peace" to someone that I had "hurt the most". That turned out to be Hope, and I decided that I'd hurt her the most because Lucca had once given Hope a concussion in a lacrosse game at school, and now assumed that her Hollow behavior (very tabula rasa) was just a symptom of brain injury. That was pretty neat.
I thought the game gave a lot of opportunities to fill in personal details like that. It's kind of like "always ask questions" gets applied more to the players in MH than in other AW hacks.

My character concept was inspired by the comic works of Ross Campbell.
For example: 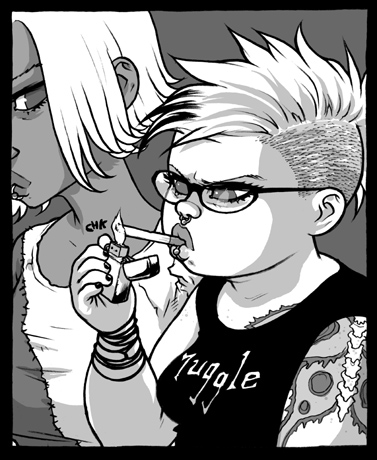