Eero_Tuovinen
August 2013 edited August 2013 in Game Design Help
Jim Raggi published a bunch of new books last week, most of which I hadn't seen even a peek of in pre-production. Exciting times! One of these was particularly intriguing, an adventure of sorts by Vincent Baker. Seclusium of Orphone of the Three Visions is the name. It's not actually an adventure module, despite some gestulation in that direction, but rather more of a procedure for creating adventure locations with random tables. 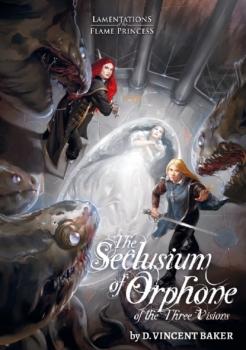 Now, my opinion on the matter is totally premature, and not at all critique-grade - I just read the book yesterday, and got the idea I'm going to present below today. That being said, here's what I thought of the Seclusium: it's basically a waste of money for anybody looking for a D&D adventure, and not very good as an array of random tables. When considering it as an adventure, I find that it fails horribly by not doing the actual legwork of D&D adventure creation; a thing without determined maps, monsters or treasure is just a bunch of ideas, not an adventure. The greatest failing of all is how lax the problem-solving set-up in the ready-made adventure locations is, they mostly seem to offer very little in the way of danger or reward. When considered as a procedural random generation tool the book fares a little better, but frankly Matt Finch's Tome of Adventure Design is much superior in this regard, just to pick an example of what the baseline in the genre is like. The writing is of the fine quality we've come to expect of Vincent, but the organization of the book (and the weird notions Vincent offers about what things are important to randomize about an adventure location) makes using it unnecessarily burdensome. All in all I simply find that apparently either I don't grog what's to like here, or Vincent doesn't write a very useful OSR book.

All that being said, Seclusium is not entirely devoid of virtue: I find the central conceit to be interesting. The core idea of the book (aside from the ample Vancian aesthetics) is basically that a wizard's living space in D&D could and should be interpreted more as a manor house than the traditional "wizard's tower": give your wizard an entire island or other secluded place, and treat the grounds of it as a smallest-scale wilderness crawl. Spread the wizard's habitation over a couple hectares of gardens, perhaps, and scatter interesting locations like small sanctums, servant quarters, zoos, specialized laboratories, flawed experiments and whatever else around the place. This is different from the traditional dungeon-based structure, as a manor-house arrangement presents the players with a much, much greater degree of initial freedom in choosing which minor locations around the grounds they'll explore. It's a fine set-up for a scattering of strange special encounters, perhaps some random encounters while the party wastes time, and even small dungeon-like locations within larger buildings or expanding under the ground.

I suspect that I'd have a more positive initial opinion of the book if the random tables were presented up front, and the sad sample scenarios were left out entirely. I suspect that the actual random tables are not bad enough to not be used, even if I don't feel any major creative need to delve into making up seclusia right now. Were I making a book about this sort of topic, though, I'd leave out the random tables for the type of stucco the wizard used in his walls and instead focus on providing e.g. map geomorphs, random treasure tables and various sorts of hazards that are appropriate for seclusia of the Vancian tradition.

(I think it's obvious to Jim and Vincent that I bear no malice in laying out my opinion here. I say this because the random reader might not know of our prior relationship, and might read the above in some sort of angry or spiteful tone. Win some, lose some, all projects can't be winners - and besides, it's well possible that my initial impression is not the word of Truth that I like to pretend it to be. And anyway, the point of this posting wasn't the above, that's just background for my Idea.)