Rafu
May 2017 in Play Advice
This other thread has the context: running a quick dungeon delve at a convention.
My current plan is to use Tunnels & Trolls 1st edition, and not just for the historical value of it. You can currently buy a PDF of a rough scan of the 1975 badly photocopied booklet for under $2, if you dare, but beware of the incredibly crude, juvenile attempts at humor, including quite a lot of disturbing frat-bro stuff (women not really welcome, I assume) and the incredibly disturbingly casual mention that PCs can buy slaves (who are way cheaper than a piece of armor, anyway, and let's not mention what the text says about female slaves).
Oh, well, I've bought it and read it by now, and can't unread it, and there actually are quite a few things I do like in terms of game design, so I might as well use it and put myself as a buffer and filter between the players and the text, I suppose. I particularly like the "aggregated" way T&T deals with combat, especially for a casual convention game, as I believe it doesn't risk triggering that habit most contemporary D&D players have, of narrating each and every attack roll as a single sword-swing, allowing me to keep it nicely abstract and big-picture instead. It's also a great boon than monsters are described by a single all-purpose stat.

Despite the short time-slot, I definitely want to have character creation be part of the experience, using the original roll-3d6-in-order method. Following your fine advice in the other thread, though, I've decided to put together starting equipment packages, so that instead of rolling 3d6x10 and going shopping each player just rolls 3d6 on the table and gets more-or-less as much gear as they could have bought with the equivalent money roll - a great time saver. Furthermore, I love what Johnstone Metzger has done with random starting equipment in The Nightmares Underneath: there, you can roll packages including such fine items as "a notebook containing an earnest young man’s surprisingly eloquent poetry", "a letter reminding you how disappointed in you your family is" or even "a fire in your heart that the nobility can never quench". I then resolved to make my random tables just as colorful, including hints of backstory coded into the characters' stuff: a daunting, but exciting, task which will probably take me at least as long as designing a dungeon adventure from scratch, but whatever, I'm probably going to have a free afternoon or two just before the weekend of the convention.

Which brings me to the meat of the issue... I'm working from scratch because I can't just use - or effortlessly port - any gear packages written for OD&D, and I can't do that because the pricing of some items is so different in T&T as to look like some seriously fucked-up economics... I wonder whether anybody has experience with T&T or perhaps can, just out of their general OSR experience, advise me about any liberties I might consider taking with the equipment lists, departing from rule-as-written. For a starter, here is the T&T 1e basic gear shopping list (thanks to Oakes Spalding of Saves Versus All Wands blog): 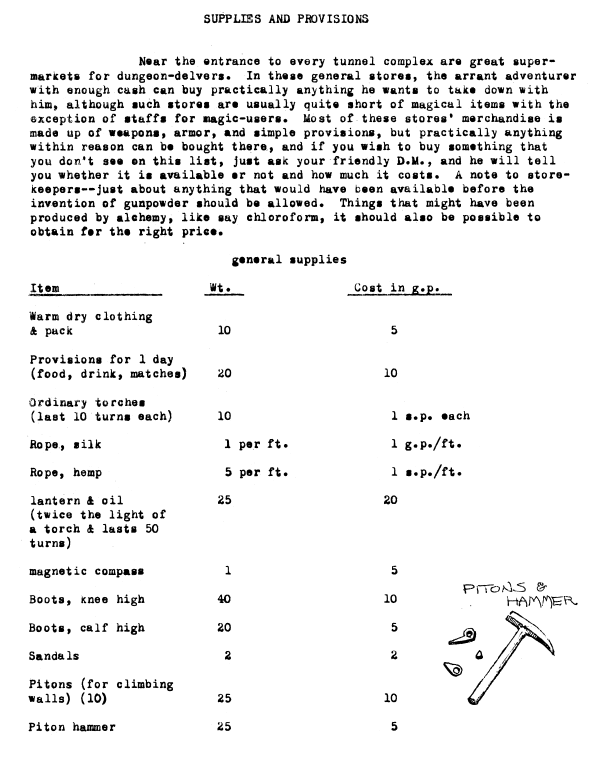 And here are, from the same source, the expanded armor list and but a small sampling of the extended weapon list: 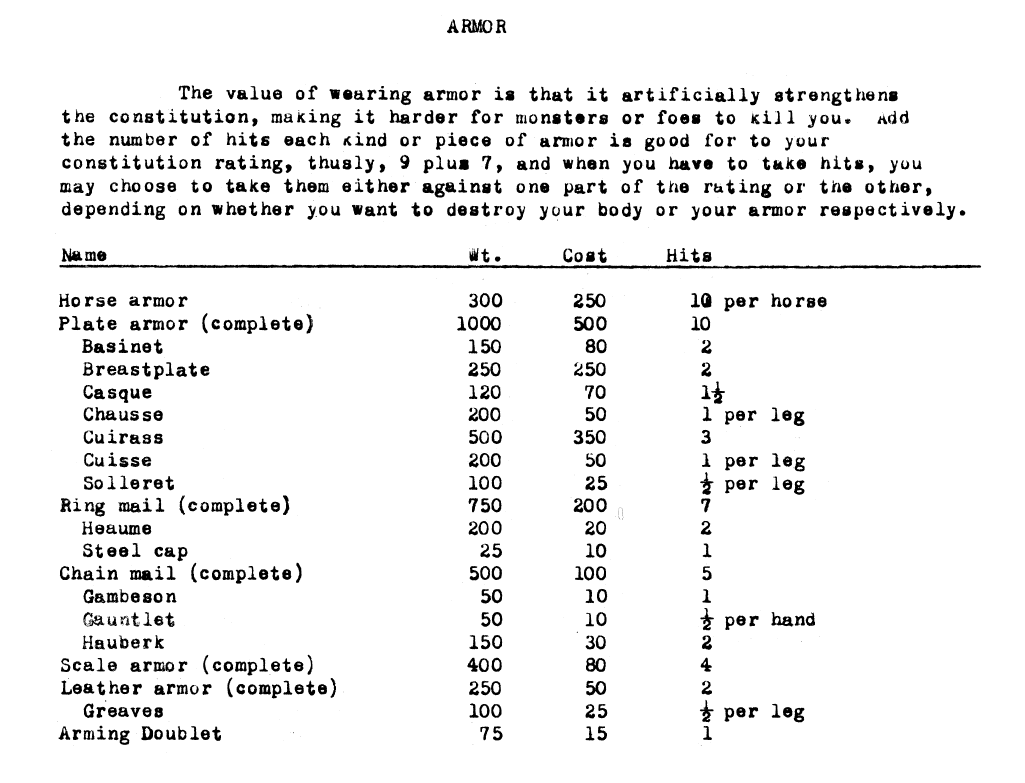 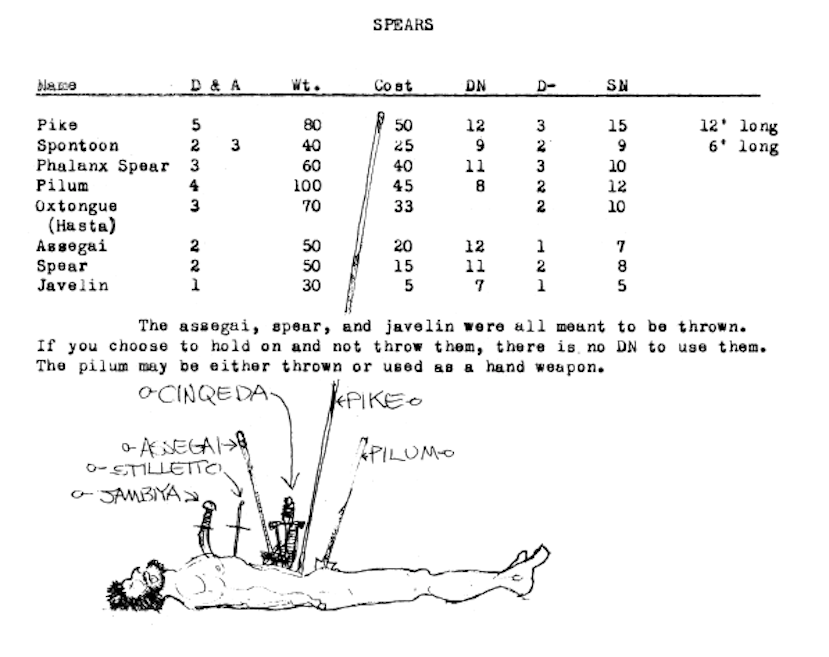 I submit these to your consideration and will follow up shortly with my own thoughts.

Also of note is that henchmen are dirt cheap in T&T 1e: a mere 10gp upfront payment for a PC-classed 1st level NPC, plus of course the cost of equipping and provisioning them (which is much more significant, at the above rates!) and the promise of a share of treasure ranging from 1/6 to 1/4 after deducting what you spent on their gear because "of course" they owe you for it (!). Labor is dirt cheap, apparently, and T&T delvers are terrible employers, but the interesting side is everybody was advising me to include a lot of "redshirts" as potential replacement PCs and, at these rates, I believe I can actually include a henchman with a lot of the starting gear results (probably a poorly equipped henchman, but still...).