Inspired by the current Shadow War Armageddon thread and the story-miniatures game In a Grail Epoch, I've been thinking about taking advantage of the physicality and personality of miniatures in a story game.

There's a few different facets I'd like to explore (Maps, Bonds and Schemes, actually), but here's something to kick off discussion: a city- and character-creation tool based on In a Grail Epoch.

Maps
Lay down some butchers' paper.

Gathering miniatures
As a group, get together a collection of miniatures numbering at least three per player (you will place three each, so a larger collection gives you more choice on what to place).

Any time is a good time to talk about tone and content, but now is an especially good time: e.g., "I notice there's a few drow in this set. I want us to avoid making a race evil, especially one with dark skin".

A good collection will have some miniatures that are quite similar (same species or profession or something else in common) and others that are quite different. Each miniature should be able to have a personality and be able to move between locations: a tree-person that cannot move or a car that has no brain is not appropriate.

Placement
Placement occurs in three rounds, with each player having one turn in each round. Each turn follows the same structure:

1. If it's Round 2, the player draws a Bond between two miniatures (more on this later). If it's Round 3, the player draws a Bond between two miniatures, and then another Bond between two other miniatures.
2. The player selects a miniature and places it somewhere on the butchers' paper.
3. The player grabs an index card and secretly writes the name of the character associated with the miniature. They also EITHER write the location that that character is most often found in (marking them as a Non-Player Character, or NPC) OR they write their own name below the character's name (marking them as a Player Character, or PC). A player can only write their own name on ONE character's index card, and they must write their name on ONE character's card.
4. The index card is then placed face down next to the miniature.
5. Play then passes to the player to their left.

Drawing a Bond between two miniatures simply involves drawing a line between them IN PENCIL. By the end of the third Round, make sure that every miniature is connected to at least one other miniature. Do not draw multiple Bonds between the same characters.

Creation
Flip over all index cards.

Firstly, note all the Player Characters. Write "Bonds" on their card, and then write down every character that they have a Bond with.

Take PCs off the map.

Then lift up each NPC's index card in turn and write down on the empty space on the butchers' paper below:

Draw a little image of the location if you like. Then trace over with marker any NPC-NPC Bonds, while erasing any NPC-PC Bonds (because these are already recorded on the PC's index cards).

Finally, for each PC pick an NPC that they have a Bond with. Draw a little picture of a house on that NPC's location, and write the PC's name next to it. That indicates that the PC can usually be found in that location.

Tada! You have a map of a city, the NPCs associated with each location, the connections between locations and the relationships between characters!

Although NPCs and PCs are associate with certain locations, they can - and should - be moved around in play as they pursue various Schemes. That's the next part of this structure that I'd like to develop.

I played a rough version of this with myself last night, and I was satisfied with the results. I chose too-eclectic a mix of miniatures, so the city is confused and not as interesting as it could be. But I think you can see the kind of interesting relationships and pieces that could emerge. 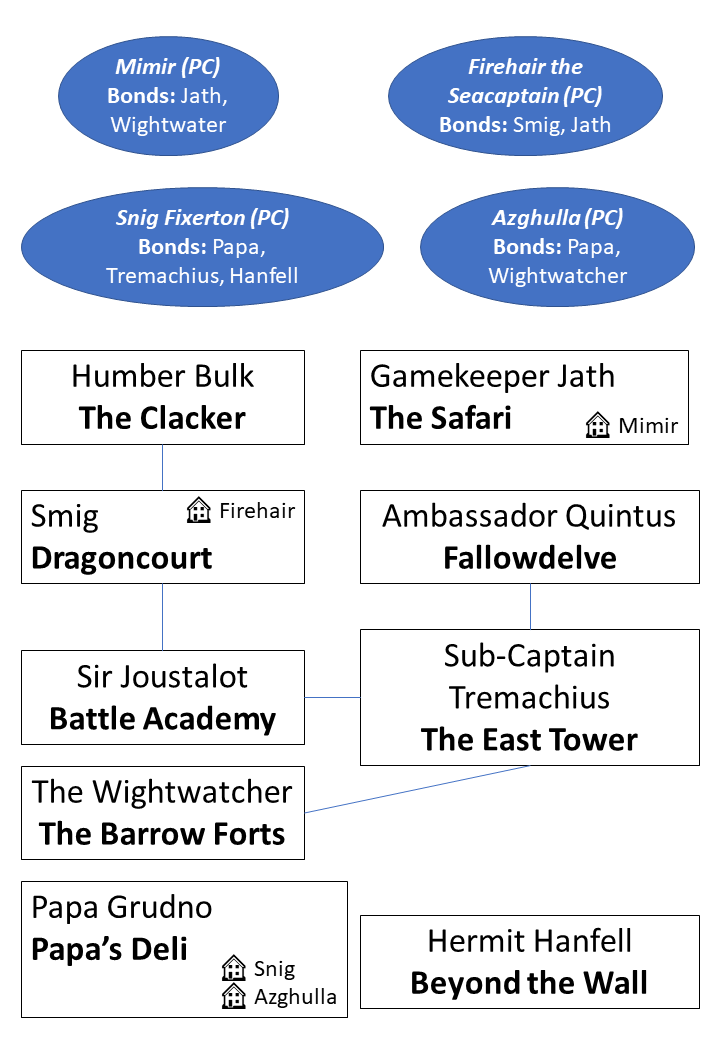 And with the miniatures in situ (obviously you'd use a much larger piece of paper if you were doing this for real): 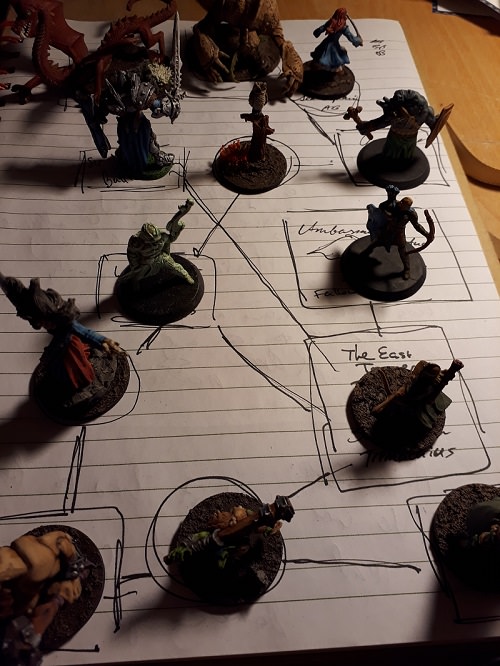